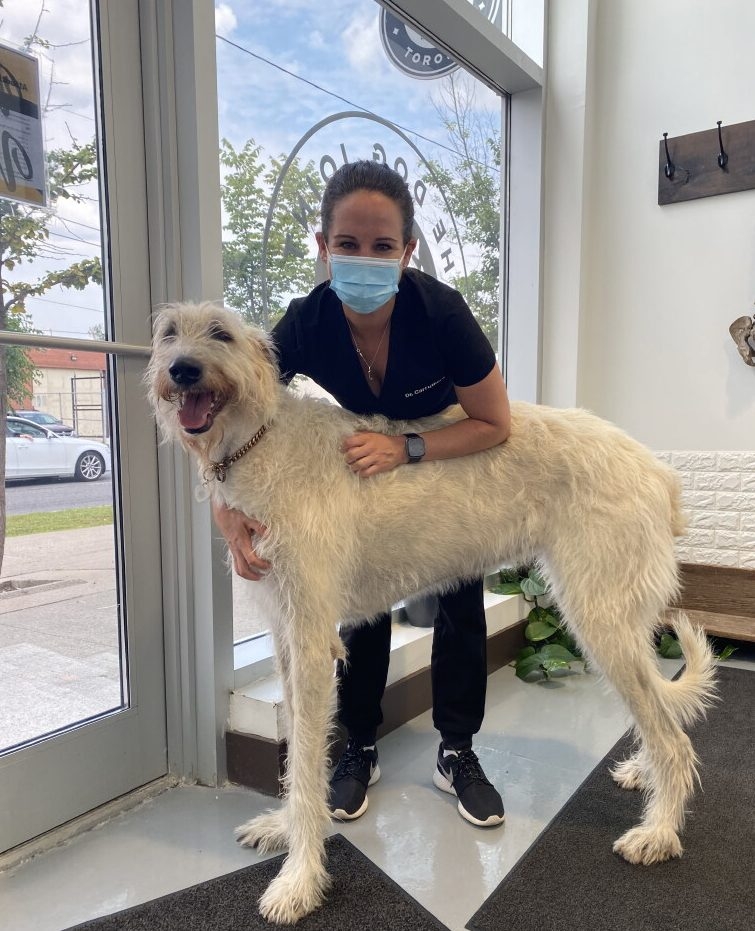 Toronto chiropractor Dr. Taron Carruthers has been bitten by some of her patients.

And, no, they weren’t human.

“I’ve been stepped on, I’ve been bitten, I been kicked,” Carruthers, 35, said of her equine patients as the co-owner of Stockyard Chiropractors and The Dog Joint treating both humans and animals (dogs, cats and horses), respectively, since October 2018.

“I’ve never had a human kick or bite me so that’s great.”

Yes, Carruthers is an animal chiropractor.

“Most people when I tell them what I do have never heard of it,” she said. “But it’s been around, I want to say, since the ‘80s. It’s just gaining popularity and becoming more of a thing, I guess.”

To take the animal chiropractic graduate program, you either have to be a licensed vet or a human chiropractor.

We apologize, but this video has failed to load.

“The anatomy is definitely different but it’s all still neurology (the nervous system of the brain and spinal cord),” said Carruthers, who graduated in 2014.

“The program was very intense. I was shocked at how hard it was, especially from an neurology standpoint. So we do learn very different techniques. It was amazing actually. It made me a better human chiropractor taking the animal course, actually, (in terms of ) just a better understanding of what an adjustment actually does.”

Carruthers said most dogs and cats in need of chiropractor work exhibit behavioral changes like sitting down on walks, being unable to jump into the car, or on top of the couch, or not eating or engaging with their owners.

Hot spots, or places they are excessively licking or biting, is another warning sign.

“The most common thing I see for sure are senior dogs right now, because one of the first thing that starts to decline as they get older is their hind end strength and mobility,” said Carruthers. “That and just arthritis and stiffness that goes along with that.”

After an adjustment both dogs and cats tend to become sleepy, but getting them to cooperate beforehand is the real trick, she said.

“With dogs, treats are very much a part of the treatment,” said Carruthers. “(With cats), I have learned over the years if I put a heating pad down to let them sit with me, they will purr away and just hang out. I’ve only been bitten twice in my career by a dog, one was a French bulldog and one was a bull terrier.”

Carruthers, who grew up riding and competing, began her practice adjusting horses in Muskoka for four years before opening up the Toronto clinic.

She said with the help of two big vinyl-covered styrofoam blocks stacked on top of each other she gets up “really high usually in the aisle of the barn and then delivers an adjustment. ”

“I’m not a very big person either but you adjust one joint at a time, not the whole animal,” she said with a laugh.

“They’re athletes. They can get the same aches and pains, strains, sprains as we can, like human athletes.”

Carruthers, whose practice is currently comprised of 40% horses, said when you relieve horses of discomfort, they’ll lick their lips, yawn or sigh and drop their head.

“I find that most of the time they respond quicker and more profoundly than people to chiropractic (work),” said Carruthers. “So it’s really satisfying in that regard.”

From our newsroom to your inbox at noon, the latest headlines, stories, opinion and photos from the Toronto Sun.

Thanks for signing up!

A welcome email is on its way. If you don’t see it, please check your junk folder.

The next issue of Your Midday Sun will soon be in your inbox.

We encountered an issue signing you up. Please try again